CNN reporter Anderson Cooper has covered some of the worst humanitarian crises in the world, yet he remains an optimist about mankind and, especially, the role of journalists in telling people's stories — despite current antagonism toward the media.

“The answer to the attacks on reporting is more reporting,” he said.

“There is truth and there are lies. There are facts and there is fiction, and it is our job to point that out even if it seems at times like no one is listening,” said Cooper, who received the 2018 Walter Cronkite Award for Excellence in Journalism on Wednesday. A journalist for more than 25 years, he has won 13 Emmys and is the anchor of CNN’s “Anderson Cooper’s 360” and a correspondent for “60 Minutes.”

Global poverty is declining and literacy and health are improving, and there is much to be hopeful about, Cooper said at the awards luncheon held by the Walter Cronkite School of Journalism and Mass Communication at Arizona State University.

“The thing that gives me the most hope is the power each of us has to reach out and care for someone else,” he said.

Cooper, who has covered war zones and natural disasters, recalled the many times he has seen strangers helping each other during a crisis.

“I’ve seen so many acts of bravery and selflessness among others,” he said.

Cooper praised the Cronkite School students and said he’s impressed that they have a clear vision of their journalism careers. After he graduated from college, he wasn’t sure what he wanted to do. He tried to get a job as a broadcast journalist, but when no one would hire him, he set off for Africa.

“If no one would give me a chance, I had to take a chance. I decided to start going to wars.”

Using a fake press pass, he went to Somalia in 1992, during a famine and civil war.

“Until I had been to Somalia, I had never seen starvation up close,” he said, remembering the bodies piled up everywhere. He sat with a couple whose young son had just died, the boy’s legs as thin as the twigs that made up their hut. He was their fourth child to die.

“It was in that moment I found my calling,” he said. “I knew I couldn’t save people's lives, but I could bear witness to their struggles. They weren’t dying in silence.”

Even with all the powerful stories he has told, Cooper still feels like he rarely does justice to the enormity of the moments he has seen.

“You try to capture all that — not just the facts and numbers and names but the sounds and the smells and the silences.

“You try to find words to convey the horror and humanity you’re surrounded by.

“More often than not you fail because that camera lens is so small.” 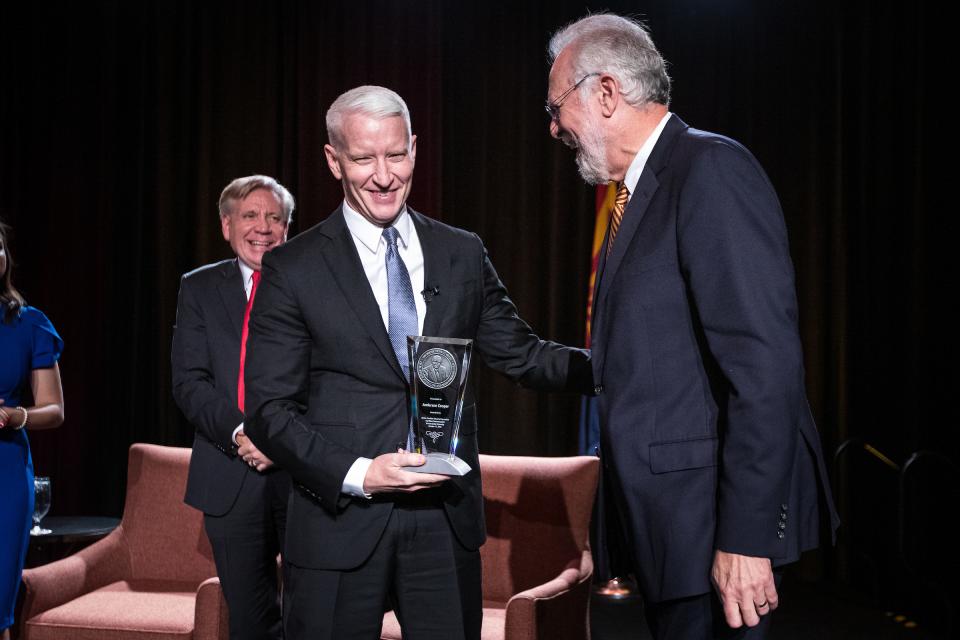 Christopher Callahan, the dean of the Cronkite School, thanked Cooper for “speaking truth to power in the great tradition of Walter Cronkite.”

“At a time in our history when journalism, facts and the truth itself are under attack every day, we believe that a free, robust and unfettered press remains the most essential element to the health and the future of our great country, our democracy and our freedom,” Callahan said.

Gabriella Bachara, a senior in the Cronkite School, told the crowd that Cooper is a constant presence on the big TV screen in the First Amendment Forum in the school.

“I’ve sat in the forum with hundreds of other students watching him break the biggest news stories during my four years here at ASU,” she said.

After the luncheon, Cooper met with students in the Cronkite School on ASU's Downtown Phoenix campus.

Senior journalism major Bryce Newberry asked Cooper how he prepares a show when the news is constantly changing.

“All I do is read stuff all day long,” Cooper said.

“What I prepare for are contentious interviews. I spend hours looking for transcripts of every interview that person has done over the last six weeks.” 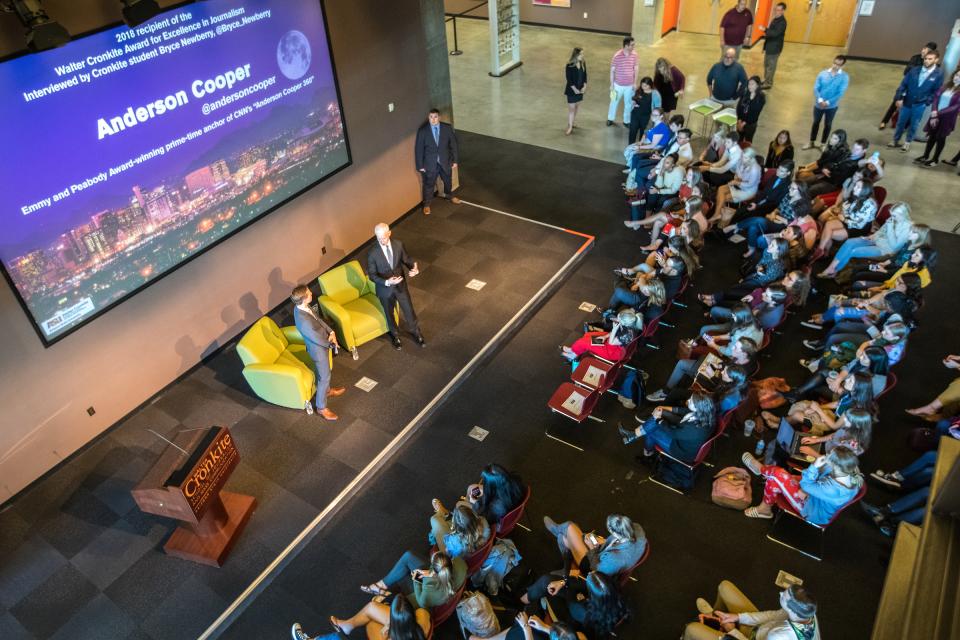 That preparation allows him to see their talking points.

“You can arm yourself with facts and you’ll see if somebody said something that’s not true, and you have what is true, you can have that in your arsenal to push back.”

Cooper told the students that they have technical skills he never learned, but that passion will be the key to their careers.

“You all have something that is unique and different, and don’t let somebody in a newsroom who’s been in the profession for 40 years squeeze that out of you and make you sound like everybody else who’s already in the newsroom.”

Top photo: Emmy and Peabody Award-winning broadcast journalist Anderson Cooper speaks after receiving the 2018 Walter Cronkite Award for Excellence in Journalism at the Sheraton Grand Phoenix, on Oct. 17, 2018. He spoke of his adventures and some of the journalists he’s known who have given their lives while telling stories around the world. Photo by Charlie Leight/ASU Now