ASU strengthens its bond across the border with universities in Mexico

The bonds between Arizona State University and its partners in Mexico over the past few years are producing large-scale research that will help millions of people as well as small projects to assist indigenous groups in tiny villages.

In a huge, multiyear agreement, ASU and Tecnológico de Monterrey have been collaborating on an exploration of energy reform through the Binational Laboratory on Smart Sustainable Energy Management and Technology Training. The deal includes exchanges of professors and doctoral students to collaborate on research.

This month, a major part of the project was completed: a platform to explore complicated socio-technological systems, such as the environmental effects of petroleum production, to make sure everyone involved has input. The data-visualization platform, called the “Energy Decision Center,” in Mexico City includes the development of a mathematical model that represents the energy sector, visualizations of the effect that different policy options can cause, and the infrastructure required.

While that project — done in conjunction with ASU’s Lightworks — has a vast reach, a professor in the Herberger Institute for Design and the Arts is pursuing a plan to help a small group of indigenous people. John Takamura, an associate professor of industrial design, has taken students to Mexico several times and will travel there himself next semester to work with an indigenous community.

“Taking students to Mexico is so important because they can see who they’re impacting,” he said. “It’s one thing to hypothetically design solutions for real-world problems, and it’s another thing to take them in the early phase before we know what we’re doing and have them talk to the people there to find out their problems.

“It becomes a real partnership.” 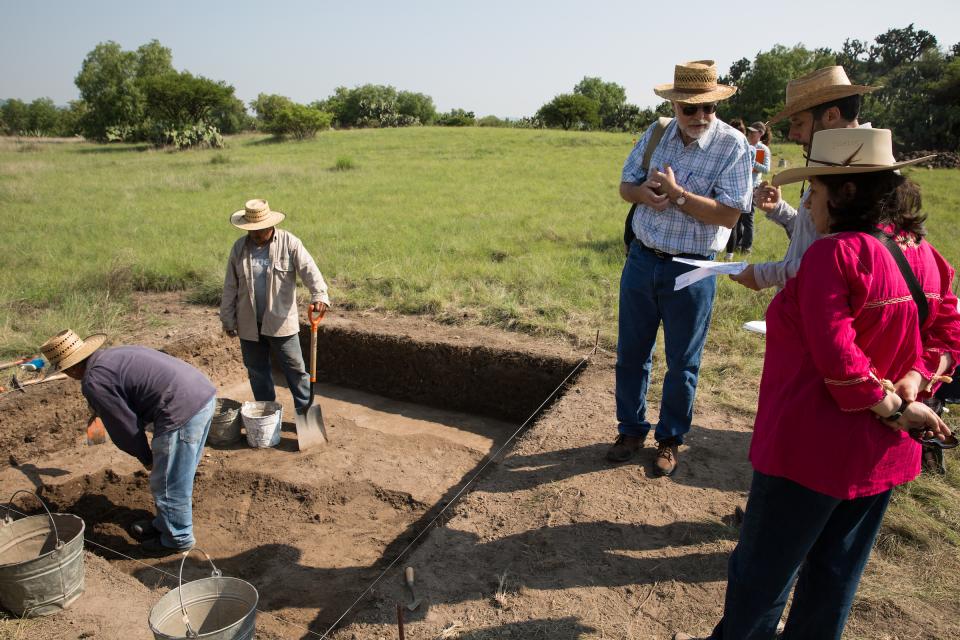 ASU Professor Michael Smith (center) talks with staff from ASU and other institutions at the Teotihuacan archeological site in Mexico. Photo by Ken Fagan/ASU Now

A few of the many projects that ASU is working on with partners in Mexico are:

• The Teotihuacan Research Laboratory in San Juan Teotihuacan is the only foreign archeological research lab on the site of an ancient city that’s home to several of the most important pyramids built nearly 2,000 years ago. The lab — which has been in operation for more than 30 years and is run by Michael Smith, a professor in the School of Human Evolution and Social Change — is a collaboration between ASU and Mexican students, scholars and staff.

• “English for Impact” is an online language-training program started last year and operated by ASU’s Global Launch and Tec de Monterrey. More than 1,000 K-12 teachers from throughout Mexico have already graduated from the program, which builds English-language skills.

Julia Rosen, managing director of Global Launch, said ASU is working with Tec de Monterrey and the Mexican government on the program. “English for Impact fills a specific need for the Mexican education system. Because the courses are online, teachers from all parts of Mexico, including rural areas, can improve their English proficiency and experience models of new ways to teach English," she said. "In turn, teachers help their own students improve their English, having a powerful multiplier effect for the country.”

• The Swette Center for Environmental Biotechnology in the Biodesign Institute worked with the National Autonomous University of Mexico on the use of microalgae in wastewater treatment, which has the potential for inexpensive nutrient removal and harvest of biomass for energy. Graduate student researchers are working in both locations.

• Keepin’ it REAL is an evidence-based substance use prevention program for middle school youth developed by the Southwest Interdisciplinary Research Center at ASU. The center is now working with several partners in Mexico to expand the program into middle schools in Guadalajara, Mexico City and Monterrey with a version centered on local cultural values, such as the importance of family and respect. The 10-week curriculum helps adolescents build skills to avoid using drugs.

• A hybrid desalination device is being developed by the Quantum Energy and Sustainable Solar Technologies lab at ASU and University of Sonora. Christiana Honsberg, a professor in the School of Electrical, Computer and Energy Engineering, said that most desalination involves very large generating stations with heavy infrastructure to transports desalinated water to users. But because installing water pipes is very expensive, a huge number of people in remote areas of Mexico face water stress.

“What we recognized is that by doing a smaller scale version of the desalination combined with solar could make an enormous impact addressing the water-scarcity issues,” she said.

“We’re developing a system that has photovoltaic, desalination and some thermal heating at a household or village level rather than a million-gallon plant sitting at the edge of the ocean.”

The team worked with the School for the Future of Innovation in Society at ASU, which had a grant to examine water stress in Mexico. Researchers interviewed people and discussed ways to address water scarcity.

The project is unique because it includes two identical systems — one on the Tempe campus and one near the Sea of Cortez, to be installed later this year. The ability to have one device at the site and a control in Arizona will be critical to measuring performance, she said.

The close work with the University of Sonora is important because research has found that when outside organizations show up to build water projects in remote areas and then leave, the systems frequently fail.

“So it’s critical to work with a partner down there,” she said. 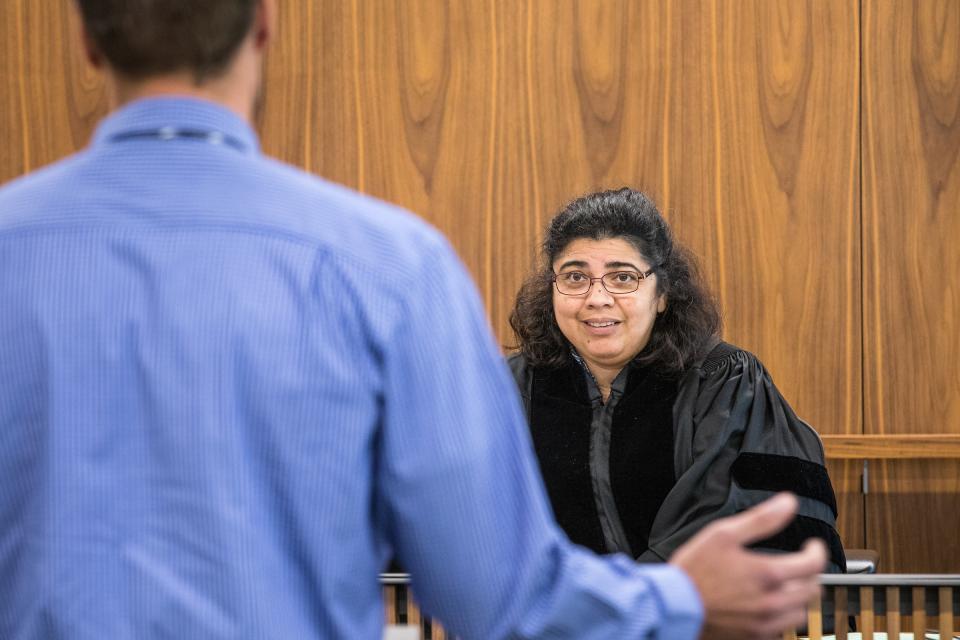 Evelyn Cruz, shown here playing the role of judge to her law students in her Immigration Law and Policy Clinic at ASU, is leading a project in Mexico to train lawyers to better communicate in the country's newly reformed judicial system. Photo by Charlie Leight/ASU Now

‘Students at the center’

Evelyn Cruz is assisting in the newly reformed Mexican judicial system and leveraging that work to help law students there. The project, funded by a $2.8 million grant from the U.S. Department of State, is a partnership with Tec de Monterrey.

Cruz, director of the Immigration Law and Policy Clinic in the Sandra Day O’Connor College of Law at ASU, said that Mexico recently changed its judicial system to be more transparent and effective, rather than having judges decide trials away from the public eye. Some lawyers have been trained in oral advocacy, which consists of entering evidence into the record, direct and cross-examination of witnesses, and opening and closing statements to the court. But the grant will allow more lawyers to be trained for free, in exchange for them working with students at Tec de Monterrey’s law clinic.

“Both universities are teaching institutions,” Cruz said. “The students are always at the center of what we do, which is not just proving our theories.

“The idea with the clinic is the students who will be going on to work in the law need those oral advocacy skills and they need to see what is good about being a criminal law attorney.”

“It’s important to recognize that the synergy with Tec is part of the success,” she said. “The ultimate goal is to duplicate this in other universities so this is a good place to start, where we have a good relationship built over the years.”

John Takamura’s projects in Mexico have been on a much smaller scale.

Over the years, he and his ASU grad students have developed several different entrepreneurship ventures as part of the Pedal Out of Poverty project, funded by an $8,000 seed grant from the Herberger Institute. All rely on energy supplied by people pedaling bikes.

“We were trying to create a low-tech, no-tech types of ventures that use design solutions to alleviate poverty in some of these communities,” he said.

They developed the “Bandit Bike Smoothie” project, a prototype in which users pedaled a bicycle flywheel to mix up the fruit smoothie, combined with education on how physical activity burns calories.

Now Takamura is working on his dissertation research — an entrepreneurship project with the women of the Mazahua community, who raise sheep and use the wool to make colorful petticoats.

“The community wanted to know whether they could monetize their weavings, so I’ve done extensive research to learn the best ways to introduce entrepreneurship into the community,” said Takamura, who, as part of GlobalResolve, has seen small village ventures become flourishing companies in other countries. He met members of the Mazahua community through his work with Tec de Monterrey.

During the spring semester, he’ll spend several weeks in the Mazahua’s remote farming community to study the best way to help them develop a business.

In earlier visits, the women told him they would like to preserve their native language, which is endangered.

“I told them, what if we said that any woman who wanted to be part of the venture had to learn the language and speak it while at work?” he said. “They really loved that idea because it’s the women who teach the young ones the language.”

Takamura had a career as technology designer before he became a professor, and working with the community in Mexico has changed his perspective.

“All of those wonderful things I designed are all in the landfill now. I don’t want to have that kind of impact in the last part of my career,” he said.

“By working with these communities, it’s transformed me and I want to see how design can impact poverty. What benefits the bottom of the pyramid benefits everybody.”

Top photo: ASU's Teotihuacan Research Laboratory is the only foreign archeological research lab on the site of an ancient city in Mexico that’s home to several of the most important pyramids built nearly 2,000 years ago. Shown here is a view of the Avenue of the Dead and the Moon pyramid with Cerro Gordo mountain in the background. Photo by Ken Fagan/ASU Now