After beginning her time at Arizona State University on a journey cycling from Flagstaff to Tempe, it was only fitting that Mia Armstrong would graduate to go on another adventure.

The double major in journalism at the Walter Cronkite School of Journalism and Mass Communication and global studies with the School of Politics and Global Studies won a New York Times contest for an essay critiquing the media’s coverage of the criminal justice system.

Established in 2006, Kristof’s Win a Trip Contest encourages university students to submit an essay on one of three topics: disagree with a column by Kristof and explain why; disagree with the Times’ coverage of a topic and explain why; or choose an issue that is poorly covered and explain how it could be covered better. In Armstrong's essay, she argued that media reports of people who are incarcerated often lack a human element.

Armstrong was speechless when Kristof himself called to inform her she had won.

Armstrong, who will graduate in May, has worked in Arizona prisons for the past two years teaching a course on writing and journalism. She said the experience gave her a personal look at the ins and outs of the criminal justice system.

She said she has long admired Kristof’s columns and thinks the trip will be a great opportunity to learn from a journalist who is covering the issues that are important to her. 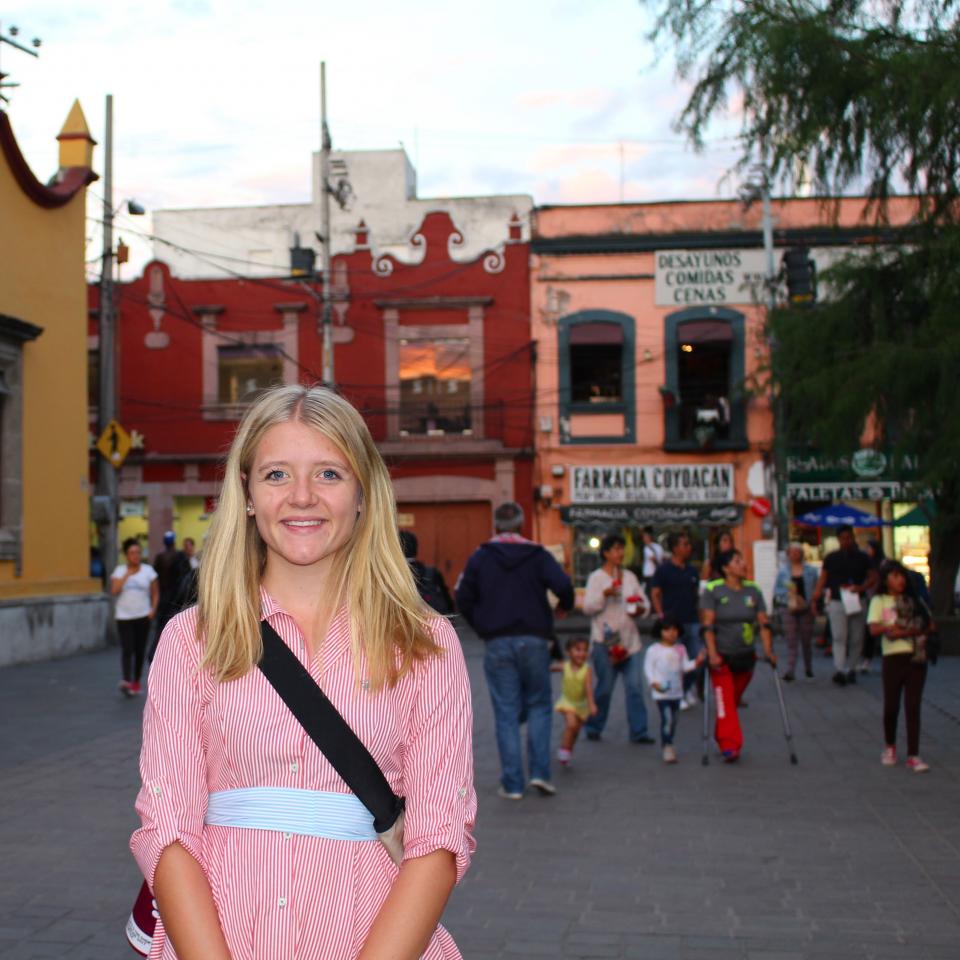 ASU senior Mia Armstrong hopes to live abroad and do bilingual reporting after graduation. She is pictured here while studying in Mexico City.

“I have always been interested in global issues,” Armstrong said. “I had lived in Flagstaff my entire life, so I was eager to learn more about the world and other places. That’s why I decided to pursue global studies at ASU.”

During her freshman year, Armstrong took a class with School of Politics and Global Studies associate professor Victor Peskin on humanitarian crisis and international intervention. The course required students to read “Love Thy Neighbor” by Peter Maass about his time covering the conflict in the Balkans as a journalist with the Washington Post.

“I loved the way that he talked about journalism as a way to raise awareness about international issues,” said Armstrong. “In that class I realized the power of storytelling in journalism to do some of the things I was interested in doing with my global studies degree.”

After that class, Armstrong signed up to add a journalism degree.

As part of her trip with Kristof, Armstrong will write pieces for The New York Times’ website. She will be reporting from either Guatemala, Haiti or American Indian reservations. A location has not yet been chosen.

In addition to her work with Arizona inmates, Armstrong is a bilingual journalist for Cronkite Noticias, an immersive professional experience in which Cronkite students report on issues critical to the Latino community. She previously interned at Future Tense, a partnership between Slate magazine, New America and ASU that explores emerging technologies.

“We are extremely proud of Mia on this amazing accomplishment,” said Christopher Callahan, Cronkite School dean. “This achievement is a testament to her hard work at the Cronkite School and her passion for international journalism. We wish her the best on her trip, and we look forward to her reporting.”

After Kristof publicly announced her as the winner of his contest, Armstrong shared that total strangers had reached out with their support. Even ASU President Michael Crow shared his congratulations.

“That’s been a really amazing experience — feeling support from people I don’t even know."

Following the trip, Armstrong said she hopes to continue her journalism career, reporting on issues related to borders and immigration.

“The Cronkite School has challenged me every step of the way — not just as a student, but also as a journalist,” Armstrong said. “The rigor and focus on doing real work from day one has allowed me to build on my skills and passion for storytelling.”

At The New York Times, Kristof has won two Pulitzer Prizes for his coverage of Tiananmen Square in China and genocide in the Darfur region of Sudan. His reporting covers human rights, women’s rights, health and global affairs. He and his wife, Sheryl WuDunn, have written several books together, most recently “A Path Appears” about how to make a difference. His next book is expected to be released this fall.

The Center for Global Development assisted Kristof in picking a winner for the contest. The CGD is an organization that works to reduce global poverty and improve lives through innovative economic research that drives better policy and practice by the world’s top decision makers.

Although Armstrong is ready for the next chapter, the idea of graduating this May from ASU doesn’t seem real yet.

“All that the university has given me — I feel very indebted and connected to that,” said Armstrong. “It will be very hard to leave but I think the connections I made here will stay with me.”

Matt Oxford and Joe Giordano contributed to this report.

Top photo: Mia Armstrong rides a bike on ASU's Tempe campus as a freshman on Aug. 21, 2015. Photo by Charlie Leight/ASU