Biology students get to see eye to eye with nature

In the Sea of Cortez, whales come up for kisses.

The place is teeming with life, and a biology class from Arizona State University came to life there earlier this month.

Octopi hugged them. Whale sharks glided past them. Sea lions played with them. Tiny lizards and crabs skittered across their palms.

“I touched a whale and started sobbing,” said Alexandrine Labban, a senior majoring in conservation biology. “I couldn’t have dreamed of the stuff we did.”

The class was “Sea Turtles, Sharks and Fisheries of Baja California: Emerging Topics in Marine Conservation,” taught by Assistant Research Professor Jesse Senko and Clinical Associate Professor Ira Bennett, both of the School for the Future of Innovation in Society and both senior sustainability scientists in the Julie Ann Wrigley Global Institute of Sustainability.

This Global Intensive Experience, organized by the ASU Study Abroad Office, was one of 15 spring break programs across 12 different countries. These 20 students were part of the 230+ students abroad on a study abroad program during ASU’s 2019 spring break.

“It was amazing to see firsthand things we learned in class,” said Lindsey Homa, a senior majoring in biological sciences.

Twenty students went on the study abroad program. They participated in a sea turtle monitoring and research project, snorkeled with whale sharks while learning about ecology and management efforts for tourism and took part in a fisheries conservation technology workshop.

And they cried every day.

“Usually it was joy,” Senko deadpanned.

“This field is all about wearing your heart on your sleeve,” he said. “If I’m swimming with a 30-foot fish and I’m not screaming like a little boy, I’m in the wrong field. … There were tears every day.” 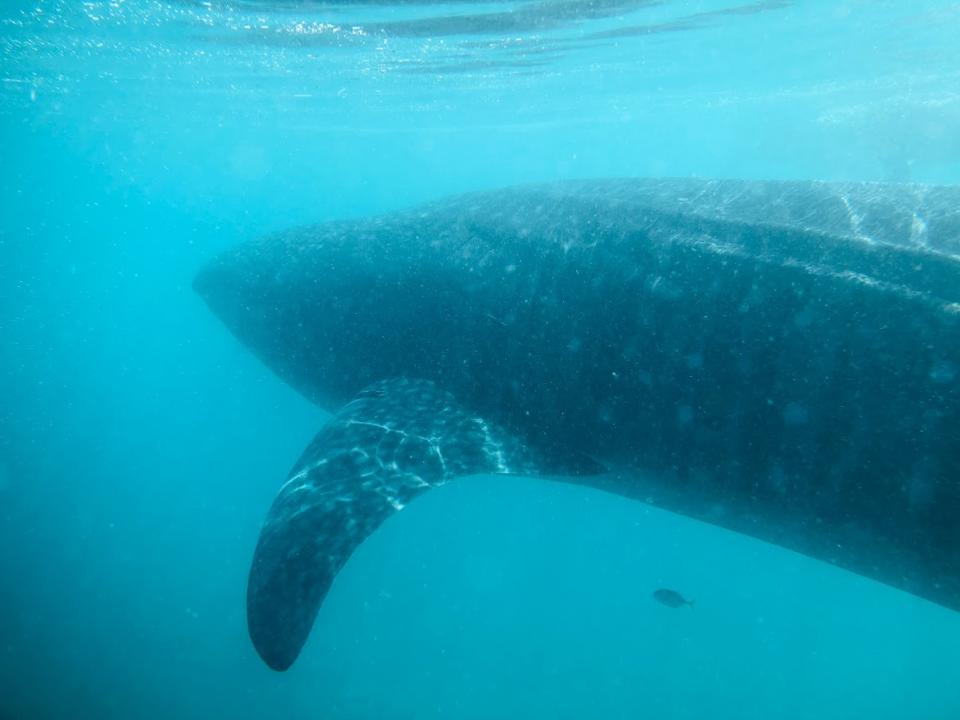 A whale shark swims in the Sea of Cortez.

Taylor Martinez, a senior majoring in biological science, said it was astounding being “in little boats with giant animals and they’re just … there,” she said. “A lot of people would be scared of the things we did.”

Corinne Johnson, a sophomore conservation biology and ecology major, was anxious going on the trip. She had doubts about her choice of major, and she was terrified of snorkeling.

“How am I going to be a marine biologist if I can’t snorkel?” she recalls thinking. On her first try, she came out of the water screaming. But Senko talked her out of her tree — and back into the water.

“Facing my fear and overcoming it the first day was life-changing for me,” she said. “Thank you, Jesse.”

They snorkeled with sea lions, saw pods of bottlenose dolphins, and got up close and personal with curious gray whale calves. They camped under the stars atop an island dune. 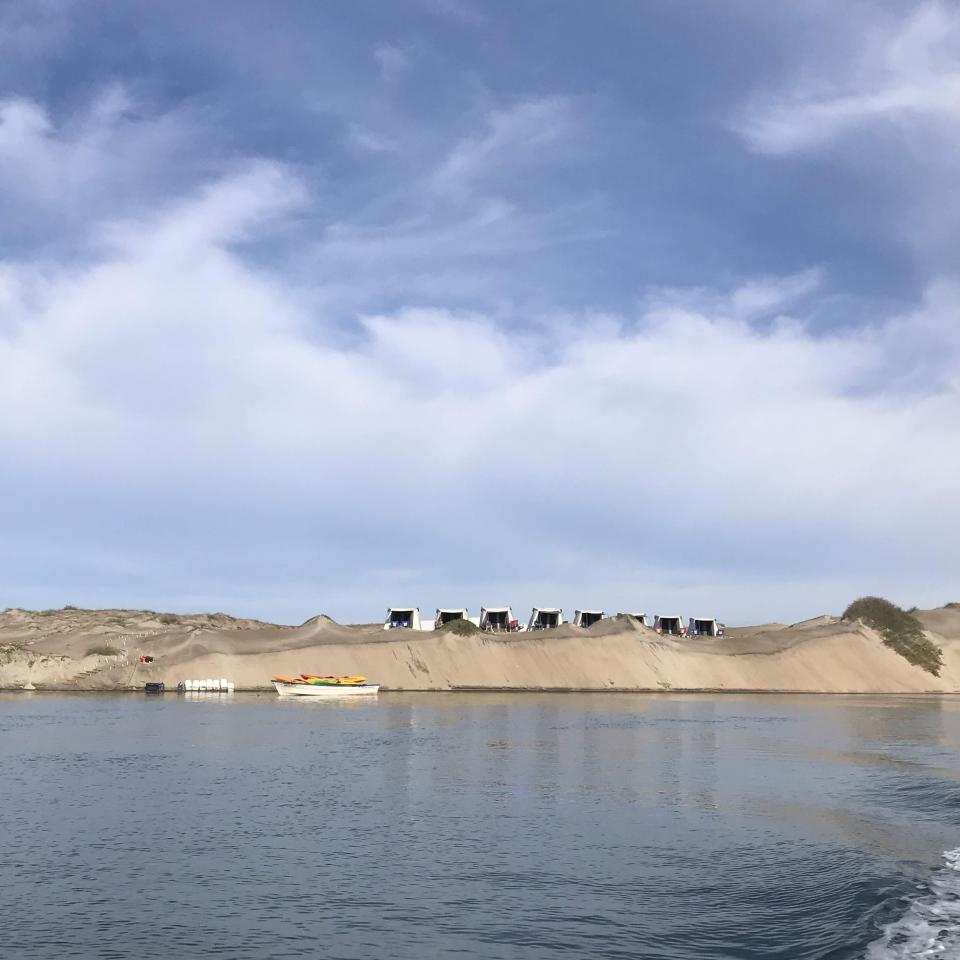 The study abroad group set up camp on a dune adjacent to the water.

“These are things I’ve wanted to do my whole life,” said Kyli Denton, a junior majoring in conservation biology and ecology.

After swimming with sea lions, they are now Christa Burgess’ favorite animal. “One of the big things for me was the power of personal connection, without just seeing it on a screen,” said Burgess, a junior majoring in sustainability.

They saw a humpback whale tangled in a gill net. “You can read a book all you want, but you don’t realize how big they are until you’re in the water with them,” said Adrian Fichter, a senior majoring in conservation biology.

(The whale was rescued, with no ill effects, according to Senko.)

For Christopher Lue Sang, a senior majoring in engineering, his highlight was pulling a 300-pound turtle on board a boat. The turtle had been previously captured and tagged.

“It is rare that we catch recaptures, and even rarer to catch males,” Senko said. “This was the largest male ever captured since we started monitoring (catching and tagging) sea turtles 20 years ago in northwestern Mexico!” 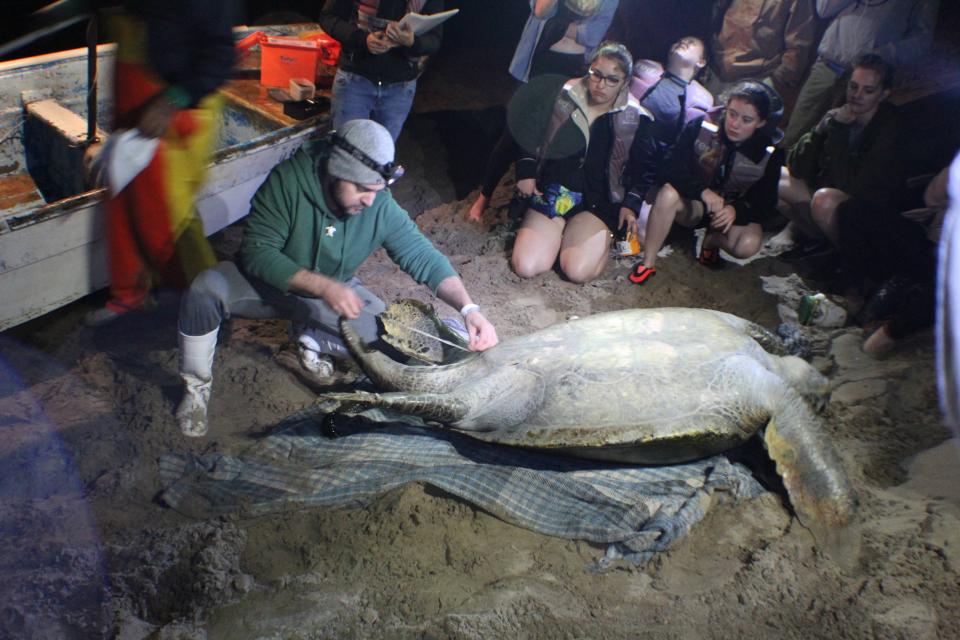 Professor Jesse Senko measures a captured sea turtle as his students look on.

Casey Sullivan, a sophomore majoring in genetics, was enthralled. “Being in the field and seeing the things these scientists do, I realized I’m in the right field,” she said.

“It seemed to get better, every day for every person,” Sullivan said. 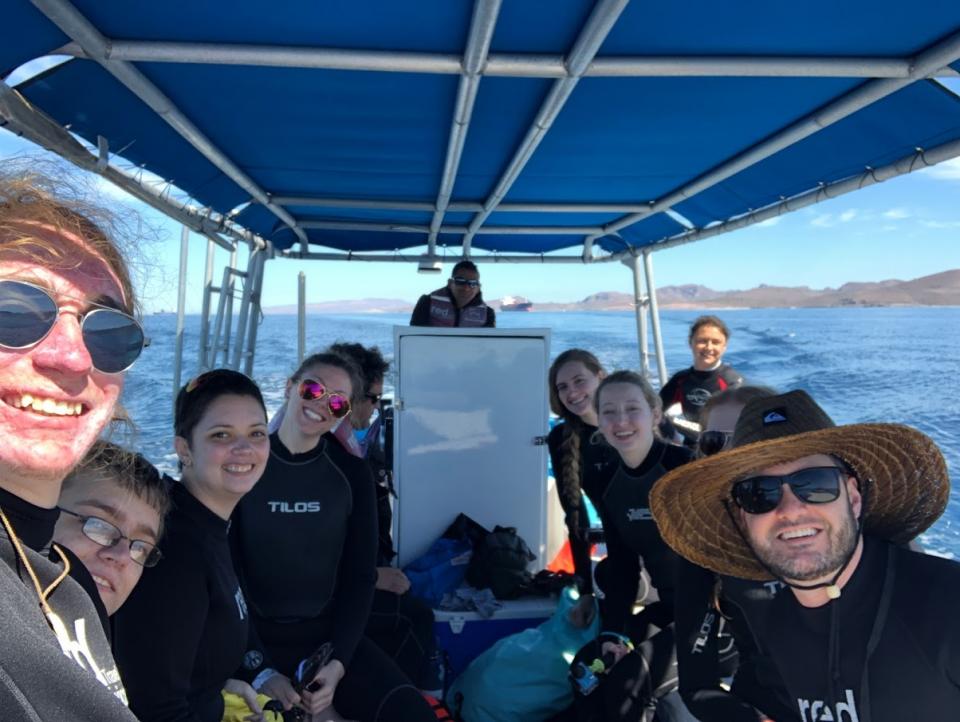 The group heads out for more firsthand experience in Mexico.

A successful trip prognosticated the shape of future classes for Senko.

“That’s why I like being in (the School for the Future of Innovation in Society),” he said. “I don’t live being boxed in. I think all conservation biology classes will be like this in the future.”

Top photo: The group has a close encounter with a whale along the side of their boat. All photos courtesy of Jesse Senko and his “Sea Turtles, Sharks and Fisheries of Baja California: Emerging Topics in Marine Conservation" students.

Global Intensive Experiences are seven- to 12-day programs that run before or after semesters and during winter or spring break where ASU students can earn academic credit while studying abroad. Learn more at mystudyabroad.asu.edu.