On course to cure

Arizona and Zimbabwe are at opposite ends of the alphabet, and traveling from one to the other really has been a trip from A to Z for Charity Bhebhe.

The Arizona State University graduate from Barrett, The Honors College has made the journey, and those who don’t understand what that entails should find her impression of ASU and Tempe instructive.

Besides hot summers, none of the above can be said of her native Zimbabwe, its economy and infrastructure severely stunted by hardships that began under British colonialism in the late 19th century and continues today. What citizens of the developed world would consider normal life is impossible to conduct in the African nation.

In the United States, for example, diarrhea is an easily managed inconvenience. In Zimbabwe, it can lead to death. Bhebhe’s goal is to one day treat minor illnesses so she can change that harsh reality for the better, one patient at a time.

One of those patients might have been her father. She was 8 when he died from pneumonia after being misdiagnosed at a hospital in Zimbabwe. That prompted Bhebhe to focus on the prevention of such unnecessary deaths, leading her to the latest stop on a 15,000-mile voyage from Bulawayo, Zimbabwe, to Tempe, Arizona, to Cambridge, England.

Now in the first stages of a PhD in pharmacology at the University of Cambridge, she was a Mastercard Foundation Scholar at ASU, where she majored in molecular biology and biotechnology in the School of Life Sciences. She earned a Gates Cambridge Scholarship, one of only 92 granted worldwide in 2018.

“My journey wasn’t perfect,” Bhebhe says, “but it successfully brought me to a beautiful ending, so I wouldn’t change anything about it.” 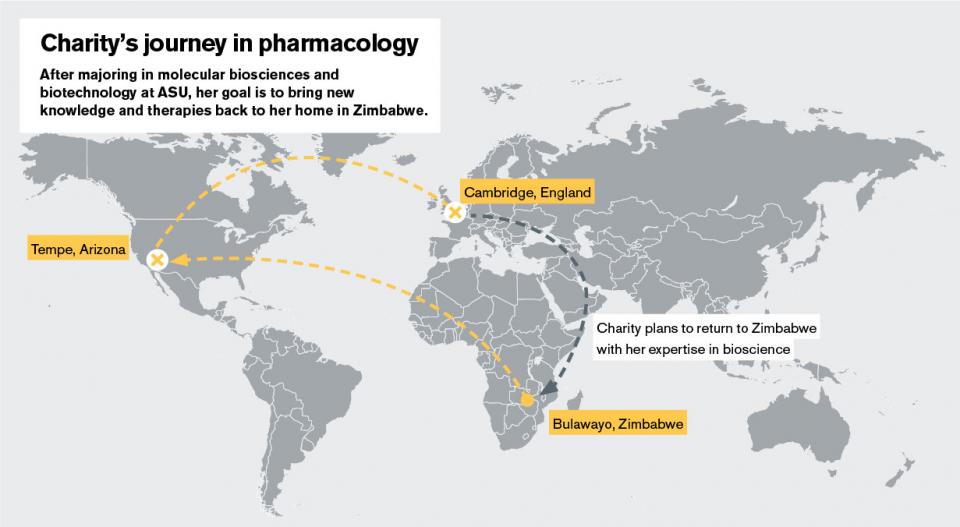 Bhebhe grew up in Bulawayo, Zimbabwe’s second-largest city after the capital of Harare. It is home to more than 1.2 million people, a sleepy place of warm, open inhabitants where the streets were built wide enough to allow wagons pulled by 16 oxen to turn around unimpeded.

Zimbabwe lacks basic health care resources, which motivated Bhebhe: “My goal is to be able to apply my medical research skills in investigating and preventing diseases.”

That led her to ASU and Barrett, The Honors College, which she chose to attend because of its “diverse and inclusive” community.

“I knew that I was going to fit in somewhere,” she says. “There is a big international community at ASU, and that gave me an opportunity to work with people from diverse backgrounds. I became more accepting and open to learning about different cultures and trying new things.”

But she was so shy, remembers Heather Bean, Bhebhe’s mentor in the Biodesign Institute. “It was like pulling teeth to get her to talk about herself and her aspirations. The one thing she conveyed to me was that she was really enthusiastic about having a career in science.”

That led Bhebhe to make one of her best decisions at ASU, Bean says, one that would set her apart from other scholarship applicants. Instead of waiting until her senior year, Bhebhe applied for a research project as a freshman. The Bean Lab became Bhebhe’s favorite spot on ASU’s Tempe campus: “It felt like home.” She continued there until her graduation in 2018, demonstrating a thirst for knowledge and, Bean says, a “brain for soaking up scientific information.”

“That was one of the key things for Charity when she interviewed for the Gates,” Bean adds. “She could speak really eloquently about her research project because she knew it so deeply. I think honestly that is what made her stand out. She took the initiative and believed in herself enough her freshman year to just go ahead and apply.”

“I received a lot of guidance from my professors and advisers as well on the writing portion of the application and the preparing for the interviews,” she says. “Being at ASU exposed me to opportunities that helped me further identify my interests for me to find my place in science and medicine.” 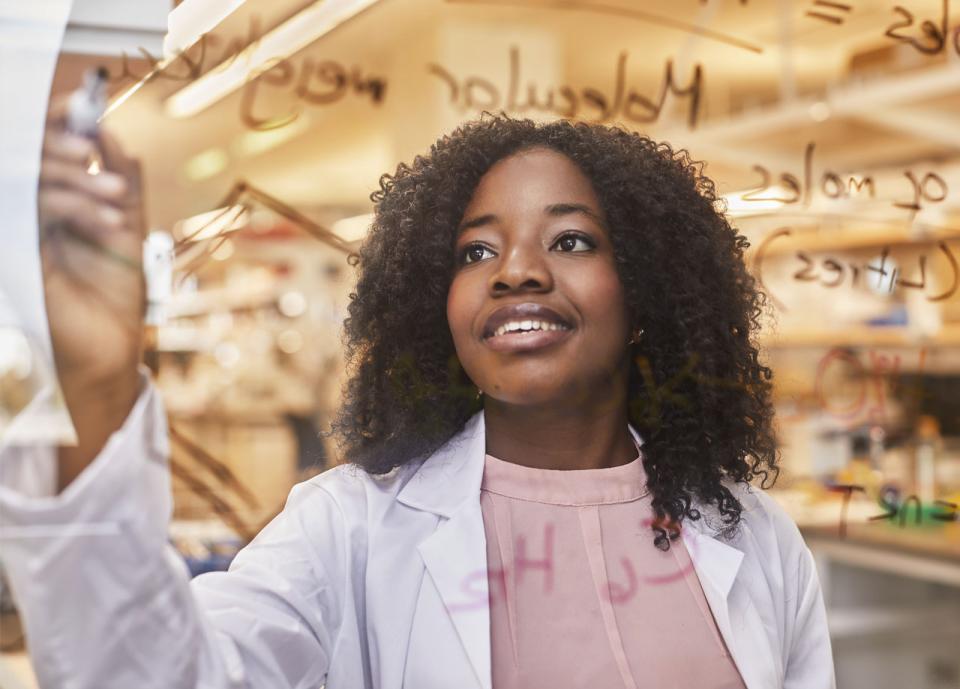 Instead of waiting until her senior year, Charity Bhebhe applied for a research project as a freshman. Heather Bean, Bhebhe’s mentor in the Biodesign Institute, said she demonstrated a thirst for knowledge and a “brain for soaking up scientific information.”

For the next three years, Bhebhe’s place is in Cambridge, where she is adjusting to the weather and trying to decipher what people are saying.

“Cambridge is beautiful,” she says. “I’ve been enjoying seeing all these amazing old historic buildings, which I’d heard all these stories about before I came here.

“The weather’s different, and that’s taken a lot of adjusting. But the biggest thing I’m dealing with is that in the U.S. I got used to American English and here it’s British English. My brain is struggling to process things; trying to go back to British English [widely spoken in Zimbabwe] after spending so many years thinking in U.S. English. I don’t even know what I sound like anymore!”

It’s mostly been a blur, she admits: “I honestly can’t wait until I know what I’m doing! Hopefully that will happen soon. I don’t know how I got the scholarship. I still ask myself, ‘How did I even get here?’”

She’s being modest. Bhebhe was one of 92 selected from nearly 5,800 applicants — a 1.5 percent probability of winning one the world’s most prestigious scholarships.

“I do think I’ve worked very hard, and I’m really proud of myself that I’ve made it this far,” Bhebhe admits when pushed. “It’s a great opportunity. I’ve learned so much just from talking to the other Gates scholars. They’re from all sorts of different backgrounds, and they’ve all done amazing things.”

If Bhebhe ever pauses to ponder her amazing journey, she might reflect on her middle name — Ntando, which translates as “will” in Ndebele, her native tongue. The more formal version, Ntandoyenkosi, means “will of God.”

It could also be taken to mean she has the will to follow her winding path back to where she feels she is needed most: Zimbabwe.

Written by Telford Vice; photos by Jeff Newton and Darran Rees. Vice is a London-based journalist has written for ESPN websites, the Reuters news agency and the Guardian newspaper, and he has broadcast for the BBC.

This story originally appeared in the winter issue of ASU Thrive magazine.